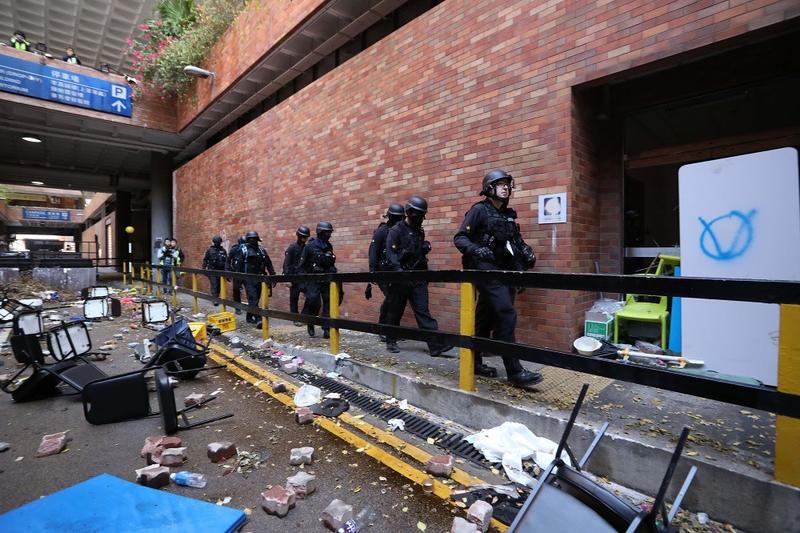 Police safety teams conduct a search of the campus of the Hong Kong Polytechnic University (PolyU) in the morning of Nov 28, 2019. (PHOTO / CHINA DAILY)

HONG KONG - Hong Kong police announced the cordon around the Hong Kong Polytechnic University (PolyU) had been lifted after officers finished their investigation and removed dangerous items from the campus.

Police said they have seized in total 3,989 gasoline bombs, 1,339 items of explosives, 601 bottles of corrosive liquids and 573 items of weapons on the campus

The campus has been handed over to the university’s management, police said.

Police have seized in total 3,989 gasoline bombs, 1,339 items of explosives, 601 bottles of corrosive liquids and 573 items of weapons on the campus, police said in the post.

During a press briefing at 10 am, a police representative said police had seized another batch of offensive weapons during Friday's operation. He added that officers did not encounter any protesters on the campus.

Stressing that, police have been adopting all along a peaceful and flexible approach in handling the standoff at the PolyU, Assistant Commissioner of Police (Operations) Chow Yat-ming told reporters that the force was grateful that the crisis could be resolved in a peaceful manner.

He said that police will not tolerate any kind of violence or illegal activities.

"We will stringently follow up the investigation in a professional and impartial manner," he said.

PolyU was sealed off by police since the night of Nov 17, after pitched battles had broken out between protesters and police officers in the vicinity of the campus.

In press briefing Thursday, police said that after more than 10 days of occupation by radicals, the campus has been badly and extensively damaged. A large number of petrol bombs, gas cylinders and corrosives left exposed under sunlight for a long time posed a serious threat to all personnel at the site, police said.

Meeting the press on Friday afternoon, PolyU President Teng Jin-guang said the university is the biggest victim amid the recent social unrest as it suffered extensive vandalism and profound negative influence on teaching and academic research.

Only 46 among the over 1,100 protesters who have been staying on campus to confront the police were PolyU students, said Teng. He added that the protesters chose to occupy the university due to its open-campus policy and its proximity to the Cross-Harbour Tunnel, a key traffic artery linking Kowloon and Hong Kong Island.

According to a PolyU statement issued on Friday noon, the university said it would only open the campus to people authorized by the university for the time being due to safety concerns.

The university appealed to those unauthorized not to enter the campus for safety reasons.