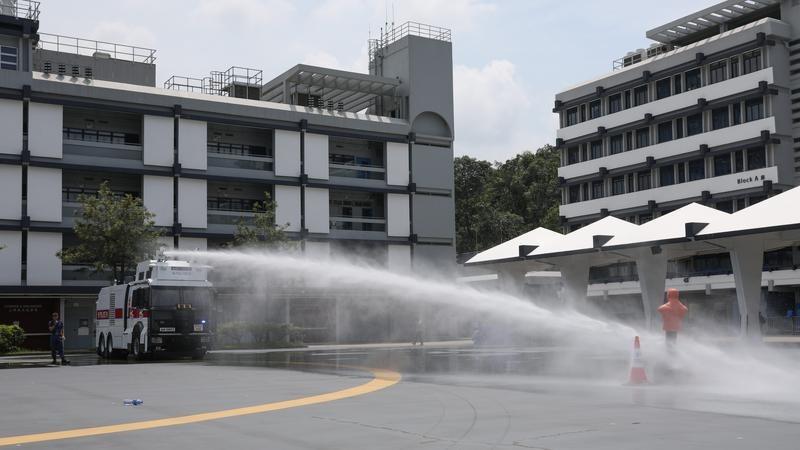 HONG KONG — As violent protests entered the third month in Hong Kong, a senior British officer in the Hong Kong police force said the recent and current situation is the most dangerous that he faced in 25 years, and the protesters seem to be well-organized and willing to go to extreme to follow a certain agenda.
"The situation on the front line is the most dangerous that I faced in over 25 years because of the level of aggression and violence from rocks, missiles and spears," Chief Superintendent David Jordan, British, said in an interview.

The situation on the front line is the most dangerous that I faced in over 25 years because of the level of aggression and violence from rocks, missiles and spears

Jordan, 52, serves as the Commandant of the Police Tactical Unit, a force for large-scale emergencies. Since joining the Hong Kong police in 1992, he has been involved in countless public order events, in particular working as a major police commander during the illegal "Occupy Central" movement in 2014.

As an operational commander in multiple clashes between radicals and the police during the past two months, the police veteran was still shocked by how quickly a peaceful procession can turn destructive, how violent some protesters can become against police officers trying to keep order, and how well-organized and planned the escalating violence can be.

"There is a routine now that initially a peaceful demonstration will very quickly change into a proactive violent destructive group of individuals who are only concerned that attacking a police station and police officers who are deployed simply to maintain order or that causing huge disruption by proactively blocking roads," he said.

"What is very noticeable is that there has been a willingness from the protesters to use increasingly violent means and disruptive methods to cause chaos," Jordan said. "They have an intent, I believe, if they have a chance to physically maim and harm police officers."

Jordan described the assaults carried out by black-clad, masked radicals who wore helmets and held umbrellas, some with knives in their hands.

"As soon as the police officers turn up on the ground being very reactive and passive, they will immediately come under serious verbal abuse, and increasingly they will have hard items, rocks, bricks, sharpened implements, spears, bows and arrows thrown at them," Jordan said. "And this, no matter how you phrase it, is a threat to their lives."

The weaponry of radicals also included toxic powders, corrosive liquids and petrol bombs. A police officer was hit by a petrol bomb thrown by a radical protester in Tsim Sha Tsui at the night of August 11 and suffered burns to his legs, according to the Hong Kong Police Force.

Since June 9, 177 police personnel have sustained injuries during operations, including 11 policewomen.

Wong Ka-lun, Senior Inspector of No. 4 Platoon of Emergency Unit of Kowloon East Region, was hit in the mouth by a steel ball fired from a slingshot on August 5, when handling the blockages by hundreds of demonstrators on Lung Cheung Road along with merely over 20 police officers.

He was diagnosed with swelling and laceration of his lips, with a broken tooth in the lower jaw that needed to be removed.
Police headquarters were surrounded, and government agencies disrupted. The Legislative Council building was also ransacked.
Radical protesters besieged and attacked the Liaison Office of the Central People's Government in the Hong Kong Special Administrative Region and defaced the national emblem in front of the building on July 21. Masked extreme radicals recently twice ripped the Chinese national flag off the pole in Tsim Sha Tsui and flung it into the sea.

Protesters also deliberately blocked main roads, disrupted subway operation and packed the high-speed railway station, leading to paralyzed traffic. Their so-called "sit-in" at the Hong Kong International Airport also turned into massive blockades, causing chaos at one of the world's busiest airports. Not only flights were canceled and numerous tourists stranded, but a traveler and a reporter were detained and beaten.

The Hong Kong police have arrested 748 radical protesters during a series of violent incidents since June 9. Among the arrested, 115 have been charged with various offensives.

The dangerous situation, with sometimes 100 violent protesters surrounding one police officer, has justified the use of force which is commensurate with the level of violence, Jordan said.

"What is a shame is that it is an individual photo that may be used to show a four-hour incident," Jordan said. "And unfortunately, that one photo is sending the message. And that one photo is used to say police brutality or excess use of force without having any idea of the circumstances that led to that use of force."

"We have been incredibly restrained, and also we are only reactive," Jordan said. "I strongly feel that the role and the actions of the Hong Kong police have been as tolerant as any other police force on the planet would have been. A lot of other police forces would have acted far more productively and possibly aggressively against this kind of situation."

Fulfilling the duty of maintaining peace and stability in Hong Kong has led to many police officers themselves, including Jordan, and their families harassed and threatened.

"This is very new that they are specifically targeting the children and spouses of serving police officers," he said. "Children of police officers are being singled out, for bullying or for comments."

Police officers at four o'clock in the morning got pizza delivered that they haven't ordered, which means some people know where that person lives, Jordan said.

Despite all the danger and difficulties, Jordan said he has never regretted joining the police. "I strongly believe that the Hong Kong police force is still one of the most professional in the world."

"I'm just one of the Hong Kong police officers attempting to maintain order and serve the other 99 percent of Hong Kong people that do not support this violence and disruption, want to go about their daily lifestyle, and live without the fear of crime, disruption and violence, and that's what we're trying to achieve," he said.