Vietnam's Quang Tri farmers on the edge of crop failure 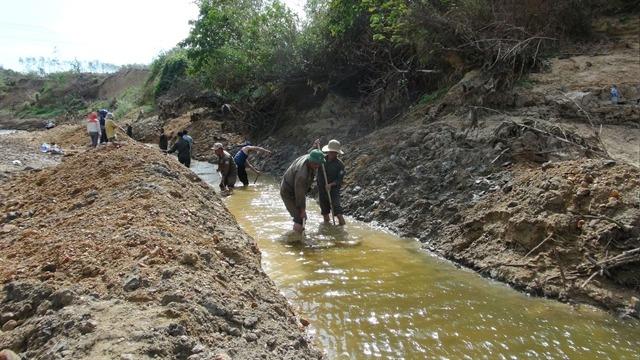 QUANG TRI — The central province of Quang Tri is experiencing one of harshest summers in history. With a persistent dry wind and barely any rain, cracks have started appearing on local paddy fields.

Looking at his lush crop, Tran Van Tuyen, a farmer in Gio Thanh commune, Gio Linh district, said the drought might destroy the fruits of his labor.

“It will be a terrible waste. We are searching for water sources and hoping for rain in the next few days,” he said.

More than 800 ha of peppercorn, 800 ha of vegetables and 200 ha of peanut have been damaged by the prolonged heat wave, according to the provincial department of agricultural and rural development.

Rice farmers have suffered the most severe losses, with 6,000 ha of crops drying out

Rice farmers have suffered the most severe losses, with 6,000 ha of crops drying out, mostly in districts of Cam Lo, Gio Linh and Vinh Linh – the province’s rice bowls.

The water shortage will prolong the summer-autumn crop by ten to fifteen days which may result in harvest failure.

The province’s 131 reservoirs, with a total capacity of 423 million cubic metres of water, provide water for more than 25,000 ha of agricultural land, fish production and local homes. However, they have witnessed a dramatic drop in water levels.

Dozens of islets have appeared, scattered around the lake bed. And herds of cows can now head to these oases in search of grass.

A similar problem has occurred at other reservoirs of Kinh Mon, Ai Tu or Da Mai.

Until early August, 11 heat waves have drained crucial water sources for farming in the province.

Little rainfall, 50 to 60 percent of last year’s average, along with the dry southeast wind has worsened the situation.

Salinity evaluated at Nam Thach Han dam flood gate on the province’s largest river of Thach Han fluctuate between 3.5 and 19.7 per mille, the highest level since 2005.

At the same time, many temporary pumping stations have been set up to take water from ponds and canals to paddy fields in order to save dying crops.

Varieties of short-day rice including HN6, LDA1, KD, RVT and Thien Uu 8 are piloted on 22,500 ha of agricultural land which help to save million cubic metre of water compared to long-day types, according to Ho Xuan Hoe, deputy director of the provincial department of agriculture and rural development.

Many farmers have switched to other crops – coconut in Vinh Linh district or maize, peanut, green bean in districts of Huong Hoa, Cam Lo and Gio Linh – which require less water.

The model will soon be duplicated in localities facing water shortages.

To better secure the water resources and efficient use of water for agriculture, Ha Sy Dong, deputy head of Quang Tri province's people’s committee, stressed upon the collaboration of irrigation companies with local authorities and farmers in distributing and saving water as well as mitigating salt intrusion.

The province set a plan to upgrade irrigation systems and cultivation schemes in response to extreme weather events.