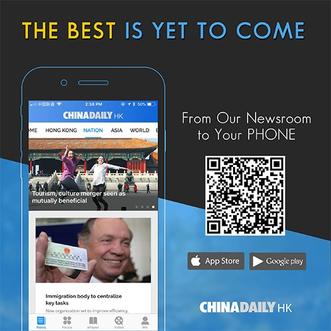 By Wang Yuke and Yang Han in Yangon, Myanmar

Ajoint art exhibition by a group of Chinese artists in Yangon is a fine tribute to the people of Myanmar — reflecting the natural beauty and unique culture of their country.

The nine artists on a cultural exchange program showcased 113 works in their Yangon exhibition, including 32 sketches.

The 10-day program, Myanmar: Through the Dragon’s Brush, was initiated and organized by China Daily in collaboration with the Chinese Culture and Art Association.

China and Myanmar may appear to have little in common when viewed at a superficial level. There are, however, important similarities and common ground between the two distinct cultures, said Zhou Li, editorial board member of China Daily Group and publisher and editor-in-chief of China Daily Asia Pacific.

“I believe our artists have succeeded in forging a connection between their distinctly Chinese artistic sensibilities and Myanmar’s gorgeous architecture, its stunning natural scenery and quietly dignified street life,” Zhou told the opening ceremony of the exhibition on Nov 21.

The tour began on Nov 13. Eight of the nine Chinese artists visited Yangon, Mandalay, Bagan and Inle Lake. Apart from capturing the natural beauty of the land, the group also visited art museums and major corporations in Myanmar; as well as the Chinese embassy and the Myanmar Chinese Chamber of Commerce.

“The art exchange program will help bring Myanmar’s art and folk culture to the international community. It will prove important in boosting Myanmar’s economy,” said U Aik Htun, chairman of the Shwe Taung Group, a leading corporation in Myanmar and a co-sponsor of the art tour.

“When we were approached to help with the program as a sponsor, I agreed immediately, not only because of the strong rapport with China Daily which had been long established, but also because we expect to build on this art exchange program to improve Myanmar people’s art appreciation ability and therefore enrich their spiritual lives.”

“They portrayed Myanmar, but in a Chinese style. The subject matter of the paintings, such as pagodas and Myanmar’s environment, will resonate with Myanmar artists, while the Chinese painting techniques are new to them, which they may want to learn from.” 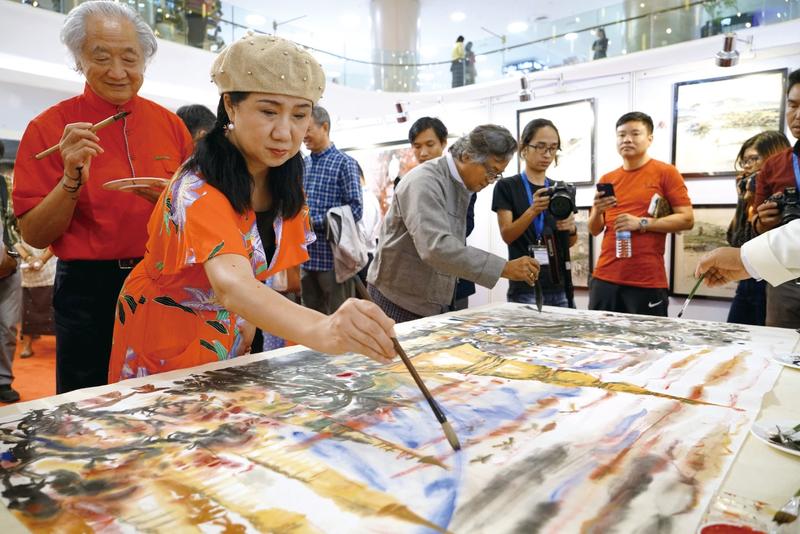 Kuku Chai Bukuk, director of the China Artists Association, puts the final touches to a jointly created painting during an exhibition in Yangon on Nov 21. (YANG HAN / CHINA DAILY)

U Nay Aung Shu, one of the top artists in Myanmar, was impressed by the paintings exhibited. “They’re all amazing,” he said.

His favorites were works by Kuku Chai Bukuk and Shi Jiangcheng. “The composition and perspective (a technique in art creation) in their paintings are fantastic.”

Famous artists from China and Myanmar gathered at a panel discussion after the opening ceremony. They shared their thoughts on culture and art exchanges between the two countries.

Chinese Culture and Art Federation Chairman Zhou Yanzhao hopes similar exchanges over art can be done between China and Myanmar. Greatly impressed by scenic views in Myanmar, he suggested more Myanmar artists should visit China in the future, expressing their feelings through art and promoting communication between artist groups from the two countries.

Renowned Myanmar artist Zaw Win Pe said he has been to Guilin in South China’s Guangxi Zhuang autonomous region several times and was impressed by art management there. He was one of the artists in Myanmar who joined the Chinese artists during the exhibition.

“I was very surprised to see how Chinese artists have shown Myanmar culture and scenery in a very vivid way,” said Zaw Win Pe.

Famous for his semi-abstract artworks, Zaw Win Pe said he was pleased to see modern art and traditional Chinese watercolor painting merge without any conflict.

“Both Chinese art and Myanmar art belong to a class of oriental art, so they have a lot in common,” explained Chinese artist Zhang Yaoming.

“We have different painting styles and use different tools, but we share the same concepts and pursuits. I hope there will be more exchanges to promote art communications between the two countries.”

Myat Tun Aung, head of the department of painting at Myanmar’s National University of Arts and Culture (Yangon), said China and Myanmar now communicated with each other in different areas. But they still do not have enough exchanges involving art and culture. He hopes more Myanmar art students can visit China and learn about its watercolor painting techniques.

Echoing Tun Aung’s views, Chinese artist Chen Hang, also dean of School of Fine Arts at Southwest University, said there are many international students at his university — including some from Myanmar.

“More work should be done to create further opportunities for art students from both countries to communicate with each other,” said Chen.

Among those attending the ceremony were Hong Liang, Chinese ambassador to Myanmar; U Tin Maung Tun, speaker of the Yangon Region Parliament; U Lin Naing Myint, deputy speaker of the Yangon Region Parliament; U Kyaw Than, vice-chairman of the Myanmar Chinese Chamber of Commerce; U Khin Aung Htun, vice-president of Myanmar Tourism Federation; Myat Tun Aung, vice-president of Myanmar Artists Organization Central and Argus Ang, chief executive of RVi Group, which is a main supporting organization for this program.