Why not import workers to fix labor shortage 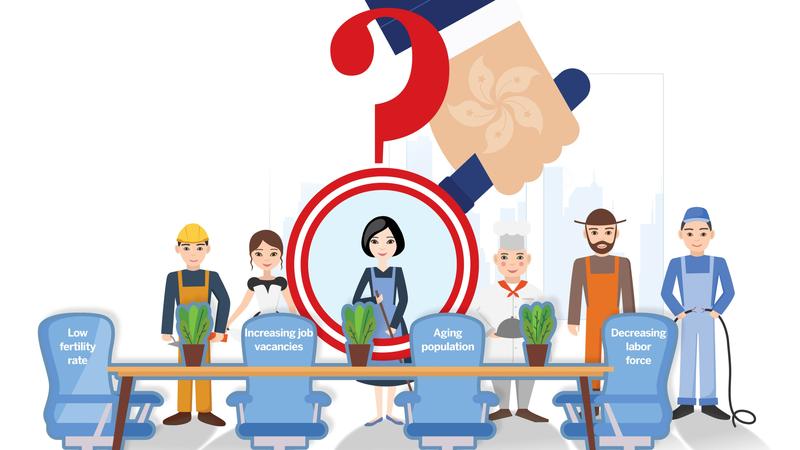 This is not a problem unique to Hong Kong. Rapid urbanization, higher education, a growing middle class and low fertility rates reduce the pool of menial and unskilled labor available in Hong Kong and other developed Asian cities. 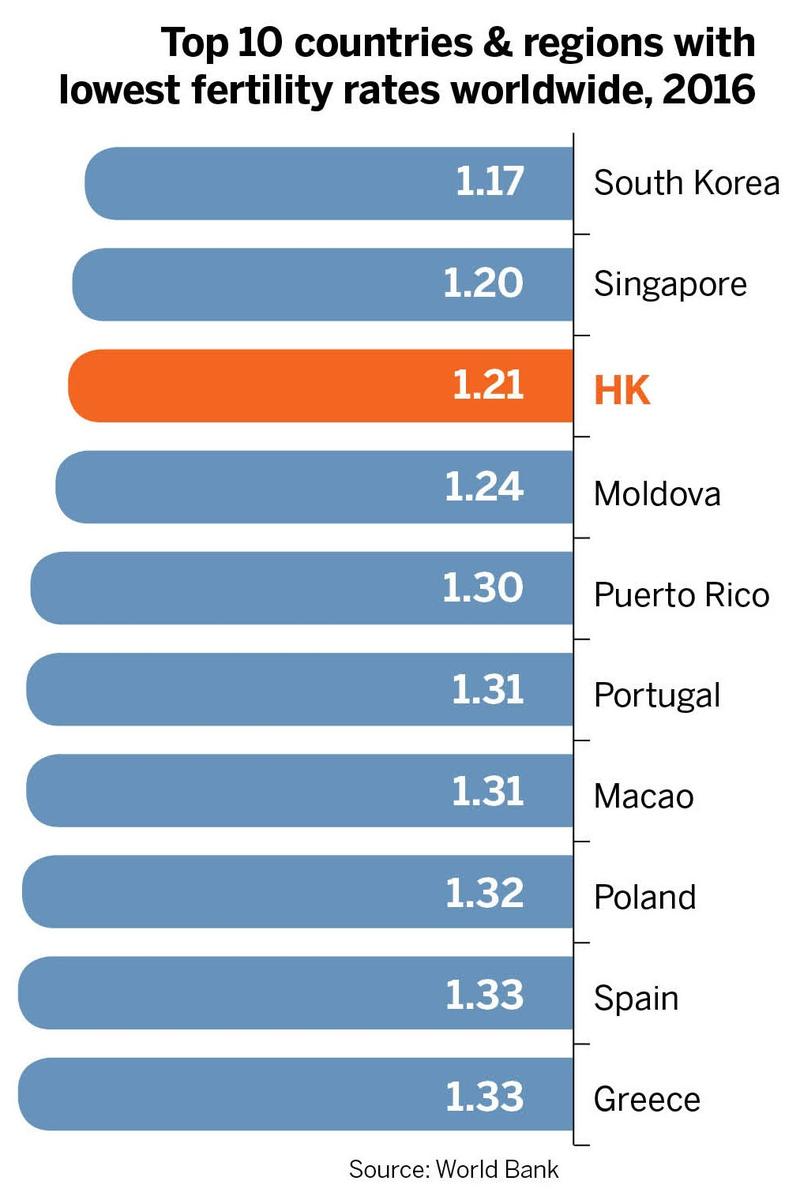 While Hong Kong has a widely accepted policy for domestic helper import, its need for low-skilled manpower in other sectors is contested by labor unions. Employers in the infrastructure, construction, restaurant and retail sectors are severely short of labor. 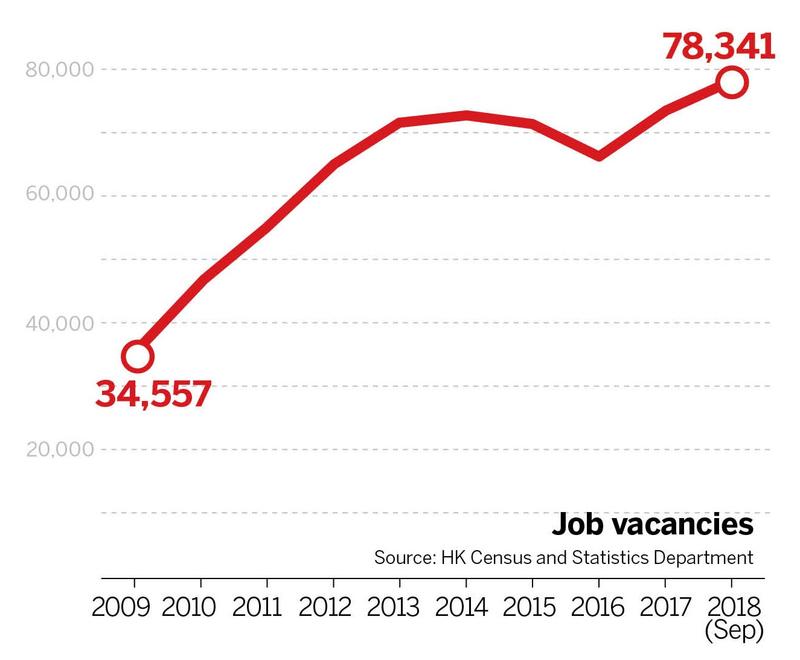 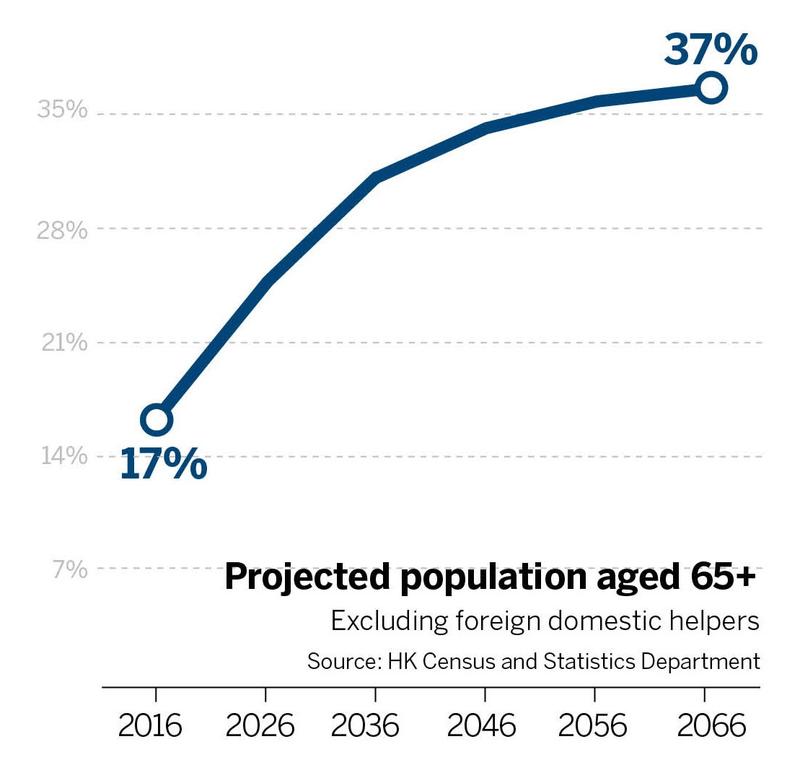 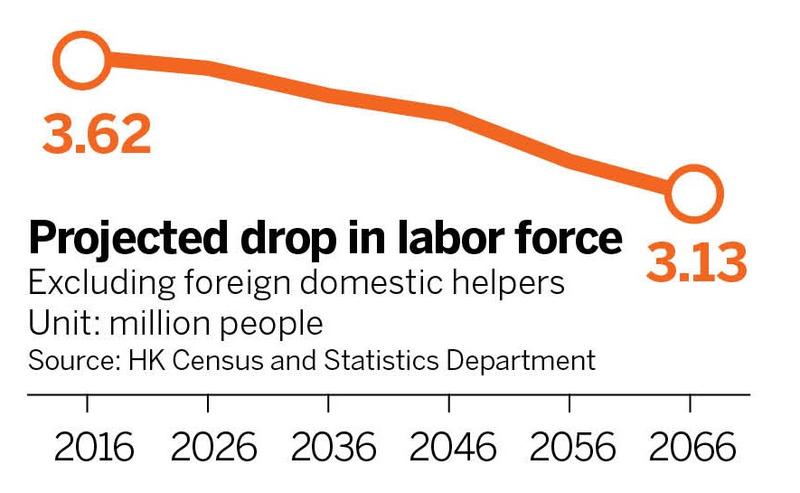 Hong Kong’s peculiar functional constituency formula leaves the administration beholden to both the business lobby and the labor unions for legislative support. On importing labor, they pull in opposite directions. The government risks alienating one or the other voting bloc. So, the problem is typically left to fester.

The infrastructure and construction opportunities in the Guangdong-Hong Kong-Macao Greater Bay Area are energizing the other 10 cities. Those opportunities don’t wait for the Hong Kong government to get its act together.

Japan, an aging society with strict immigration controls, passed legislation for two new visa categories: five-year visas for workers with a minimal Japanese-language ability in 14 under-manned sectors, and a renewable visa scheme for skilled workers. That allows a quota of 340,000 foreign workers over the next five years. 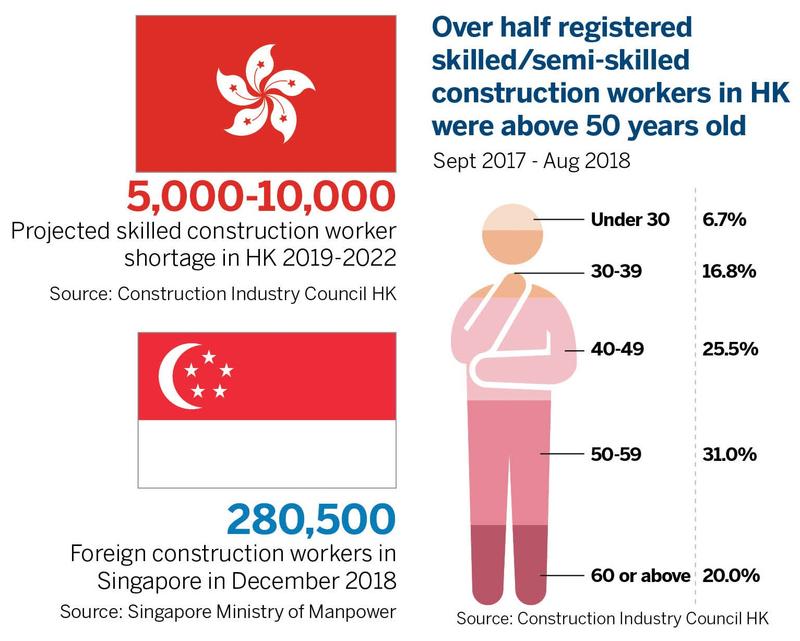 Financial incentives fail to draw youth to low-skilled, manual work. We need to import labor willing to do these less-desirable jobs, said Li.

The 2017 report of the Hong Kong Construction Industry Employees General Union shows a skilled-worker shortage of 5,000 to 10,000, from plumbers and metal workers to scaffolders and concrete applicators. This shortfall contributes to Hong Kong’s high construction costs — 40 percent above those of Singapore and Macao.

The government extended the retirement age for public servants, and unveiled policies for more women and the elderly to work — with little impact.

Li said the fundamental labor shortage remains, refering to the Singapore model, where the local/foreign worker ratio stands at 1:7. Locals fill supervisory and managerial roles. The government can tax employers of foreign workers to upgrade the skills and welfare of domestic labor. The excessively long work hours forced on workers by the manpower shortage can be reduced too. 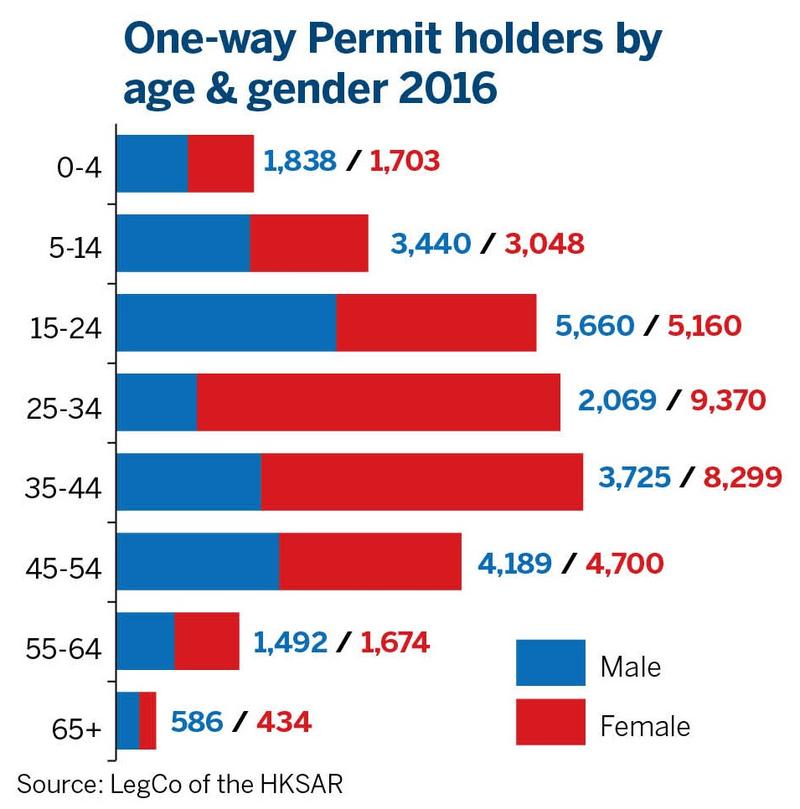 “Society should change its mindset and accept that labor deserves higher pay.” Ng cited the European labor market: “In many countries and regions, manual labor gets more pay than managerial staff.” Ng believes if Hong Kong freely imports workers, it will “doom” the local employment market. “We are talking about a 4-million labor force in Hong Kong,” he stressed.

The Labour Department’s Supplementary Labour Scheme — where specific sectors can import foreign workers for four consecutive weeks at a time, if they cannot find local workers via public recruitment — is practical, and should not be expanded, said Ng. He said this scheme works for skilled workers in the construction industry.

Hong Kong imports 20 to 30 elder-care workers each month. That has already contained the wage rise in the trade. As the job requires tiring physical work and long work hours, no locals would join the trade, said Ng.

Though conceding that this category of imported workers is vital to relieve the care shortage for the elderly, Ng argues that nursing homes should first raise the pay level for these socially unattractive tasks, to attract locals. 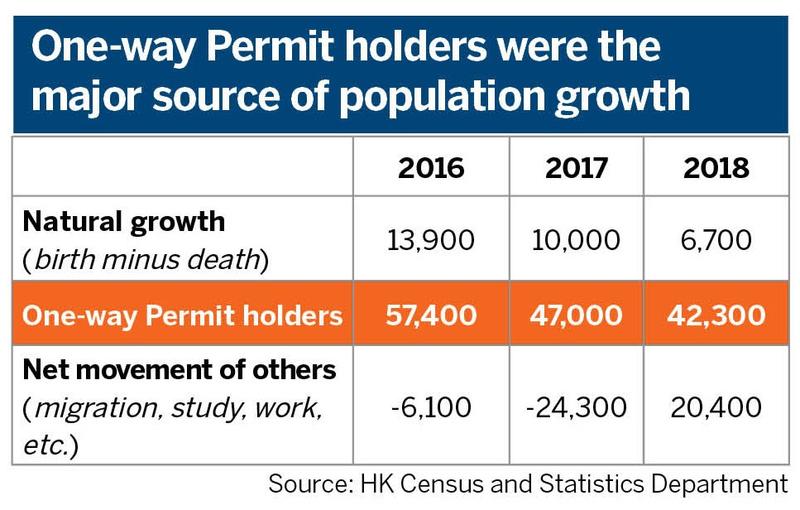 Apart from its 4 million workforce, the city has a daily quota of 150 from the mainland under the One-Way Permit mechanism to reunite with family and settle permanently. The Hong Kong government should fully utilize this resource, instead of following the foreign labor import policy of Singapore, claimed Ng.

He noted that the Singapore government upgrades local worker skills, and trains them for supervisory positions. Unless the Hong Kong government adopts measures to uplift local labor, we should not import labor, stressed Ng.

In her second Policy Address last year, Chief Executive Carrie Lam Cheng Yuet-ngor indicated she will discuss labor importation with trade unions. Tommy Cheung Yu-yan, lawmaker for the catering functional constituency, retorted: “Stop dreaming. You are asking a tiger for its hide.” After that, the labor importation debate fell silent.

Responding to China Daily enquiries recently, the Labour Department declared no change to existing policy. The department will step up vocational training for youth to learn relevant trades which have high demand.

“This is not an economic, but a political issue for the government,” said Francis Lui Ting-ming, economics professor and director of the Center for Economic Development at the Hong Kong University of Science and Technology.

Hong Kong needs to import labor for its economic vitality and competitiveness. Long-term projections by Lui and his fellow researchers, on the impact of labor importation, show favorable overall economic development for wider stakeholder benefits. For instance, imported construction labor will lower construction costs, which not only benefit homebuyers but all people in the city by allowing them to enjoy cheaper services.

But in politics, the loudest voices are always from the organized lobby groups, said Lui. Unlike the Singapore government, the Hong Kong government cannot alienate trade unions which are pro-establishment allies.

Liu rebutted Ng’s idea of raising wages to attract young people into manual labor. “It is also about career uncertainty,” said Lui. “A 20-year-old construction worker has no guarantee he would have a job at 40.” Employers cannot raise salaries forever either. Wages are market-determined. In this sense, many labor jobs are already paid high enough, noted Lui.

Lui observed that Hong Kong can outsource many jobs to the Bay Area, which has abundant labor at lower cost.

Artificial intelligence developments are a bigger issue than imported foreign workers for labor unions to worry about, said Lui. Repetitive tasks across industries will be replaced by machines. Within 10 years, Lui expects jobs with repetitive tasks in construction, transportation, washing and cleaning, and logistics to vanish. Even higher-skilled professions, like financial analysts, investment managers, medical doctors and lawyers, will see AI replacing low-end, repetitive functions. Everyone will have to learn to work with AI.

The World Economic Forum in 2018 projected that more than half of all current workplace tasks will be machine-performed by 2025. The companies surveyed reported that 71 percent of current task hours are performed by humans, against 29 percent by machines. By 2025, machines will perform 52 percent of task hours. The study surveyed executives representing 15 million employees in 20 economies. 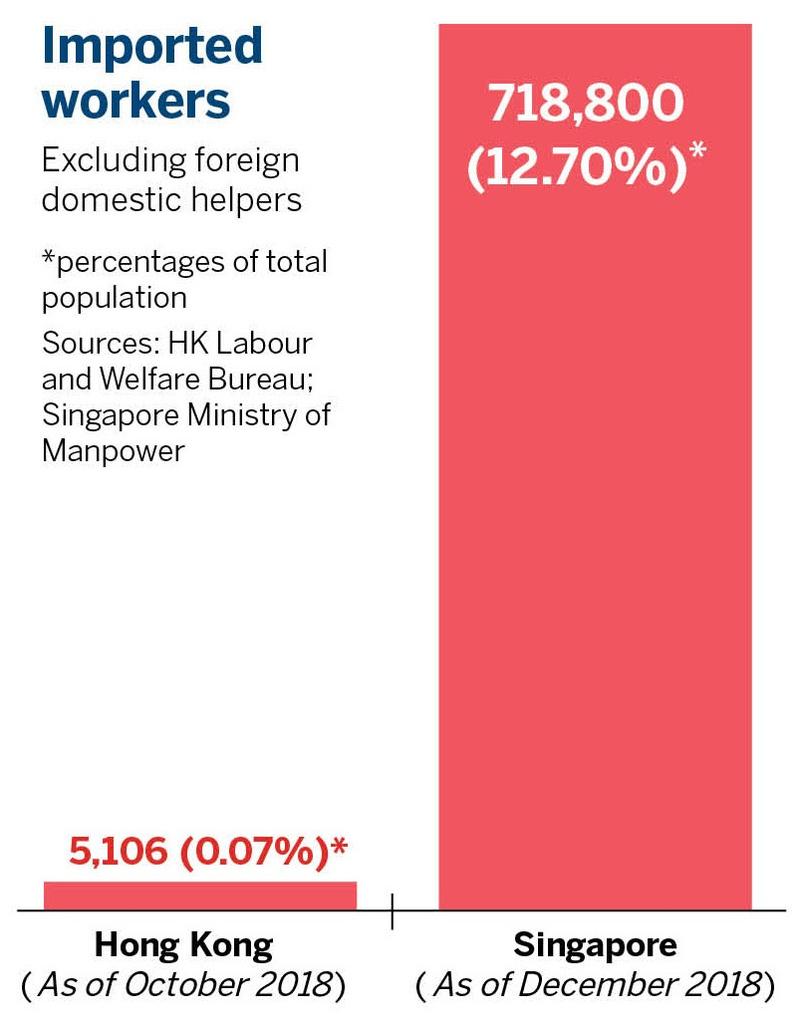 Director of the Centre for Innovation and Technology at the Chinese University of Hong Kong, Wong Kam-fai, is not worried about the “great transition”. There will be a high demand for “humane jobs”. “Demand for social workers will rise significantly,” said Wong, in a world where machines replace humans. Many will suffer psychological distress, needing counseling and companionship.

Although the next era will be AI-dominated, the city should not fall into the trap of educating for only AI-related talent and labor. “After the de-industrialization in the 1980s, Hong Kong lost its advanced manufacturing talent and skills,” said Wong. Now we are on a reindustrialization program. If we make the same mistake, we will have no choice but to rely on foreign expertise.