Discover the charm of the Bolaven Plateau in the rainy season 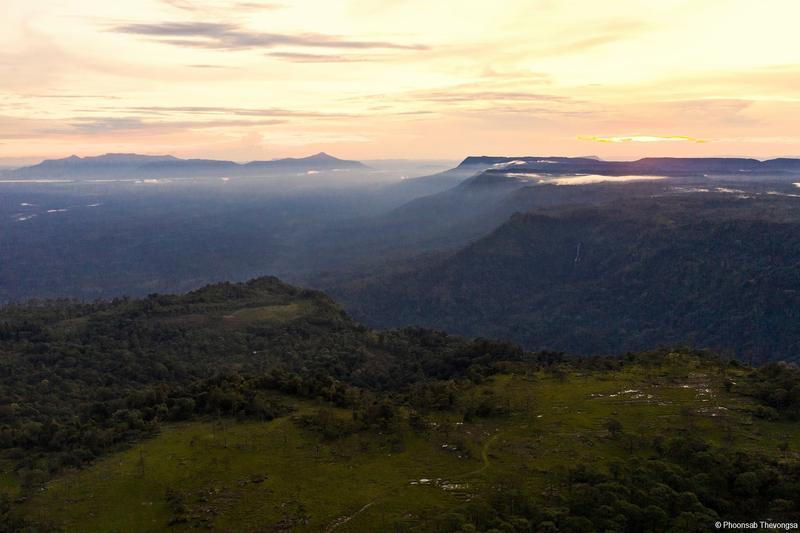 This undated photo shows a view as seen from a cliff in Dan Yai on the Bolaven Plateau, in Laos. (PHOTO / VIENTIANE TIMES)

VIENTIANE — If you have no idea where to travel in Laos in the rainy season, consider trekking up to Dan Yai and camping on the Bolaven Plateau to experience this vast and vibrant natural world from a different perspective.

Bolaven Plateau is well-known for its coffee plantations and is fascinating to anyone with an interest in natural landscapes, waterfalls and unadulterated nature.

I’ve been there many times, but had never been to Dan Yai until I came across online posts about this little known place.

I discovered that it has amazing views of hills while the pristine stands of pine trees are particularly beautiful in the rainy season, as are all the different coloured flowers that miraculously appear.

Bolaven Plateau is well-known for its coffee plantations and is fascinating to anyone with an interest in natural landscapes, waterfalls and unadulterated nature

The rainy season was clearly the best time to visit and to experience a different world, so I packed my bags and set off on a journey of discovery at the end of last month.

Dan Yai is located in Pakxong district, Champassak province, within the Dong Houa Sao National Protected Area. It is an ancient volcanic landscape with elevations of 1,000-1,300 meters which ensures it is pleasantly cool all year round.

Dan Yai opened up to tourism a few years ago and is managed by the local community. Anyone who wants to visit must first contact villagers in Pakxong district because it falls within a forest conservation area. This means visitors must be accompanied by local guides, partly to ensure their safety and also to boost local incomes.

To get there requires a drive of about 50 kilometers from Pakxe. You can choose where to start your trek, as there are two villages that provide guides - one is Nongluang village and the other is Thongkatai village.

Normally it takes about three to four hours to get from the village to the camp site. But as we arrived quite late and the rain had started to fall, we decided to hire a tractor as we wanted to get there before sunset in order to save time and carry our stuff.

The tractor took us through thick forest and coffee farms on small and muddy roads. The rain fell intermittently - 10 or 20 minutes on and off – and we had to get on and off the tractor because it often got stuck and we had to help the driver push it.

After two hours struggling along the trail we had almost reached the campsite. The rain stopped and ahead of us we could we could see fields of grass and wild flowers along both sides of the pine forest while mist drifted overhead. The scene was so beautiful that our discomfort and tiredness disappeared.

In the high elevation we were excited to see many plants that are uncommon in the lowlands, such as pine tree, wild raspberry, Caulokaempferia, Nepenthes, Burmannia disticha and many types of orchid.

After setting up camp and as the sun sank lower in the sky, our guide led us to a nearby escarpment to see two waterfalls - Kameud and Seua – whose thunderous sounds we had been following through the forest since we arrived.

ALSO READ: A waterfall with a difference

Our guide then took us to another viewpoint from where we could see a panoramic view of the misty mountain range against the backdrop of the setting sun. If we looked further we could see Pakxe and the Mekong River in the far distance.

As the sky darkened and the air grew colder we headed back to our camp and made a bonfire on which to cook our dinner and to create some light.

It was very dark because the sky held only a sliver of a new moon. The sky was very clear and after our guide extinguished the bonfire our eyes were able to see more and more. Little by little we picked out hundreds of stars which turned into millions. As the finale of this spectacle we were able to make out the Milky Way with our bare eyes which was an added bonus before we turned in for the night.

The rain began again after midnight and continued until the morning, which made us freezing cold. When we woke up and had a breakfast prepared by our guide which finished with a hot cup of filter coffee, no words can explain just how wonderful it all was.