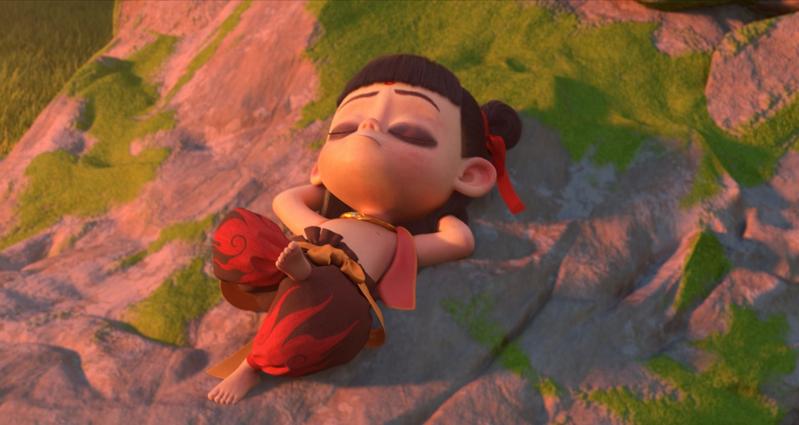 Ne Zha, the most successful film this summer, is hailed for bringing a modern touch to its major characters, such as the protagonist Ne Zha, his father Li Jing, his master Taiyi Zhenren, the antagonist Shen Gongbao and Dragon King. (PHOTO / CHINA DAILY)

Ne Zha has become the highest-grossing animated movie ever made in China, topping the domestic box office for four consecutive weeks.

The story of a mischievous boy's fight against prejudice and fate, the movie, which premiered on July 26, had taken in more than 4 billion yuan (US$567.9 million) as of Sunday.

It surpassed the wartime action movie Operation Red Sea to rank fourth among all film genres screened on the Chinese mainland.

The unexpected success of Ne Zha has triggered renewed interest in animated films among investors and producers.

On Aug 2, the stock price of Beijing Enlight Media Co, the film's main financial backer, hit a monthly high of 9.11 yuan per share, a 26 percent increase from July 12, the day before the film was shown to a select audience.

Through July 29, the 899 million yuan taken in by Ne Zha at the box office was equivalent to more than half of Enlight Media's total revenue in its 2018 fiscal year, according to a statement by the company, which is now reaping rewards after years of effort in the animation sector.

In 2015, it founded Coloroom Pictures, one of Ne Zha's major producers. It also invested in Chengdu Coco Cartoon Co, another major producer of the film and once the personal animation studio of Yang Yu, the movie's director.

Wang Changtian, president of Enlight Media, said in earlier interviews that the company considers animation to be one its most promising business sectors.

Enlight Media is not the only company interested in the industry. Last year, tech giant Tencent invested in 12 animation companies, with the largest proportion of US$317.6 million going to the video-sharing website Bilibili. 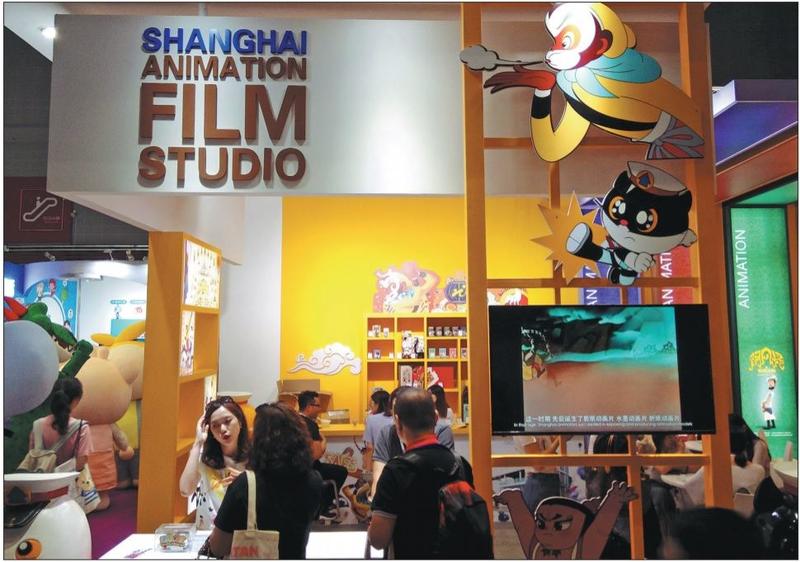 "It's beneficial to the industry in the long-run, as such giants are capable of developing business across multiple channels other than just the movie box office－for instance, film-related accessories and theme parks, among others," said Zhou, who is also director of the Chinese Film & Television Industry Research Center at the University of International Business and Economics in Beijing.

Chen Shaofeng, a professor of culture and entertainment at Peking University, also in Beijing, said China has many good intellectual properties that have the potential to be developed into film franchises and multichannel businesses. "That will create much more profit for filmmakers and investors," he said.

The professor cited global entertainment giant Disney as an example. The company's revenue from studio entertainment, including box office, in the 2018 fiscal year was about $9.99 billion, comprising just 16.8 percent of the total. Consumer products and theme parks contributed a large part of its business.

"Right now, many companies in China are innovating Disney's business model and trying to make it more appealing to domestic consumers," Chen said.

Zhou said, "More important, many financing problems that have hindered the industry's development may have been tackled by industry giants, which are accelerating their acquisition of smaller animation studios."

Chen said: "Getting sufficient financing is difficult for many domestic animation film studios. Animation production is a time-consuming process. It usually takes three to five years to make a film, which sees many investors in China's entertainment sector lose patience, as they are hoping for quick returns."

A business insider with more than 10 years' experience in animation investment said the reason for financing difficulties, or why many investors are reluctant to step into the animation sector, partly lies in failed early attempts.

Photos from left to right show a scene from 'Monkey King: Hero Is Back' and another scene from 'Kuiba III'.

By comparison, the Hollywood film Kung Fu Panda 2, released in 2011, took more than 611 million yuan at the box office to become the second-highest-grossing film in China that year.

From 2011 to 2014, none of the domestic animation films produced made it into the annual top 10 in terms of box-office takings, despite supportive policies for original animation productions introduced since 2004 by the central and local governments.

Chen said, "Despite the launch of these policies from 2004 to about 2014, few good or successful animation works were seen during that time. Instead, there were many works that had been plagiarized, and others with low production and creative values."

Tax cuts and subsidies supported animation productions, but their effect has been limited.

Neil Wang, president of business consultants Frost & Sullivan China, said the authorities often decide which project to give money to based on oversimplified criteria such as where an animation film will be shown, and for how long.

Take Shenzhen, Guangdong province, for example, where a onetime subsidy of 500 yuan per minute was offered for 2D animation works, and 1,000 yuan for 3D works, with the total amount awarded reaching 1 million yuan. The subsidies only apply to works shown on provincial TV stations. They are higher for those shown on national channels, such as China Central Television.

Wang said, "There were no criteria for animation content, so many filmmakers rushed into the industry to produce works really quickly, regardless of content quality, in order to get money from the government."

But he also said such supportive policies have benefited the industry in the short term.

Market-oriented reforms in China's animation sector started in 2000, which was late compared with global producers like the US. The supportive policies encouraged many investors and filmmakers to embrace the industry, Wang added.

Wei Pengju, director of the Institute of Cultural Economics at the Central University of Finance and Economics in Beijing, said animation film projects were funded by the government in the 1980s and 1990s, a time that saw "great works", such as The Nine-Colored Deer. The movie was produced by the Shanghai Animation Film Studio.

"Filmmakers were less concerned about money at the time," Wei said.

According to Zhou, from the Private Investment Funds Institute, in addition to lacking sufficient financing, China's animation industry is also challenged by a shortage of talent.

To earn more money, much of the talent has switched to producing mobile phone games and virtual reality works, Zhou said.

In 2015, the situation improved with the success of Monkey King: Hero is Back, which has taken 956 million yuan at the box office, making it the second-highest-grossing domestic animation film to date. 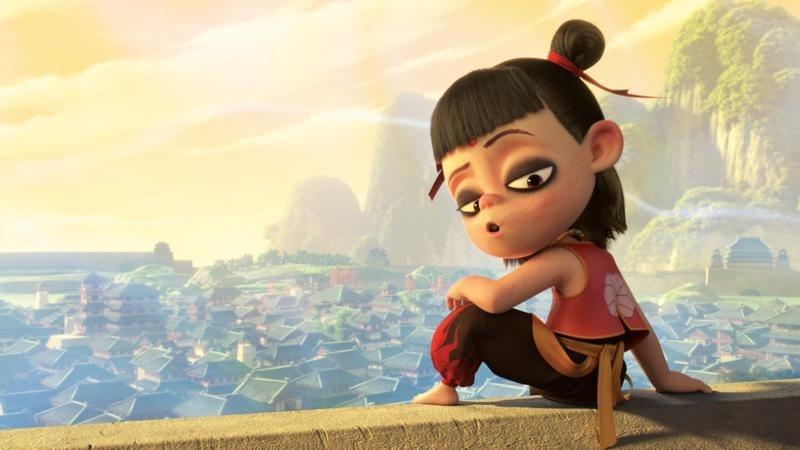 Chen, from Peking University, said, "The success of Monkey King: Hero is Back sent a signal to the market that there is still room and success for people who have dedicated themselves to creating better content rather than producing it as quickly as possible, and investors can also benefit from that."

After the film was released in August 2015, a total of 184 animation film projects were registered at the National Radio and Television Administration from September 2015 to June 2016. This represented 19.1 projects a month on average, almost double the number for the previous 12 months.

The domestic animation film industry has attracted a surge in financing since the success of Monkey King: Hero is Back. Data from market analyst Xinyuan show that financing rose from more than 1.44 billion yuan in 2015 to 2.45 billion yuan in 2016, an increase of about 70 percent.

Following the influence that Monkey King: Hero is Back has had on the market, many industry experts are now wondering what heights Ne Zha can reach.

Chen said, "China's animation industry, which had been languishing until recently, has been excited by the runaway success of Ne Zha.

"It's also a much-needed pep for the box office, which performed below market expectations in the first half of this year."

Zhou said the success of Ne Zha and Monkey King: Hero is Back has shown investors the potential market for animation films in China, and may trigger their interest in stepping into the business.

"In the past, when very few animation films were successful at the box office and among reviewers, investors were worried that studios in China were not capable of good productions. But the success of these two films has proved otherwise," Zhou said.

Wang, from Frost & Sullivan China, said further support from the government is expected.

However, Chen said market-oriented reform in the domestic animation market is still at a very early stage, adding, "Looking ahead, more efforts are needed in intellectual property protection, cultivating talent, development of consumer products, and many other aspects."