House investigating whether Trump lied in US Russia probe 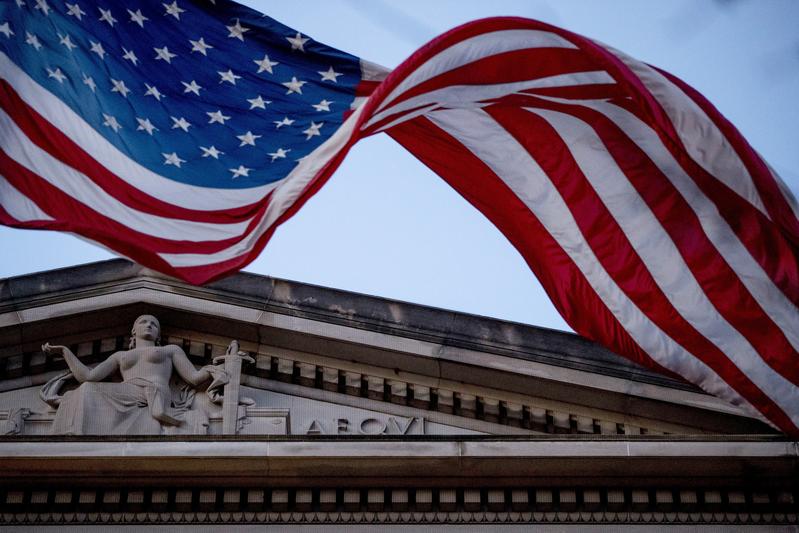 In this March 22, 2019 file photo, an American flag flies outside the Department of Justice in Washington. A federal appeals panel is voicing skepticism over the Justice Department’s claim that it can defy Congress’ request for secret material from the Mueller report. Two of the three judges who heard arguments at a hearing Tuesday seemed prepared to order at least some of the material sought by the House for its impeachment inquiry to be turned over. (ANDREW HARNIK / AP)

WASHINGTON — The US House of Representatives is looking into whether President Donald Trump lied in his written testimony for Special Counsel Robert Mueller’s federal investigation into Russian meddling in the 2016 election, a House lawyer said on Monday.

Lawmakers were examining whether Trump’s written answers to federal investigators were untruthful, according to an audio recording of an oral argument issued by the court

House general counsel Doug Letter told a federal appeals court in Washington on Monday that lawmakers were examining whether Trump’s written answers to federal investigators were untruthful, according to an audio recording of an oral argument issued by the court.

“Did the president lie? Was the president not truthful in his responses to the Mueller investigation?” Letter asked the US Court of Appeals for the District of Columbia Circuit while arguing the House needs access to redacted grand jury material in Mueller’s report.

Mueller submitted his report to US Attorney General William Barr in March after completing a 22-month investigation that detailed Russia’s campaign of hacking and propaganda to boost Trump’s candidacy in the 2016 election, as well as extensive contacts between Trump’s campaign and Moscow.

House lawyers had already disclosed the investigation into Trump’s written responses in September, saying in a court filing that the unredacted Mueller report could reveal whether Trump was untruthful about his knowledge of his campaign’s contacts with WikiLeaks, which published hacked Democratic Party emails.

The White House did not immediately respond to a request for comment.

Last week, Trump’s former deputy campaign chairman, Rick Gates, suggested in testimony during a jury trial in a criminal case that Trump talked to longtime adviser Roger Stone about WikiLeaks during the 2016 campaign.

Gates testified that after finishing a July 2016 call from Stone, Trump indicated that “more information would be coming,” in an apparent reference to WikiLeaks.

“I do not recall discussing WikiLeaks with him,” Trump said of Stone in his written responses to Mueller. “Nor do I recall being aware of Mr. Stone having discussed WikiLeaks with individuals associated with my campaign.”

A federal judge on Oct 25 granted the House’s request for access to the grand jury secrets in the Mueller report.

The Trump administration appealed the ruling to the US Court of Appeals for the D.C. Circuit, which held an oral argument on Monday to debate whether to put the October ruling on hold while it considers the legal merits of the dispute.