Conjuring up the Ghibli mystique 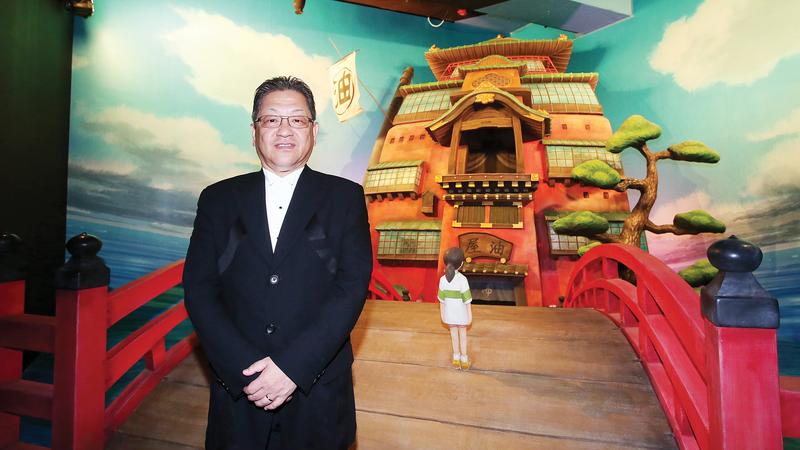 Studio Ghibli chairman Koji Hoshino says the company’s succes is owed to the ambiguity and mystery about some of the favorite film characters. (CALVIN NG / CHINA DAILY)

Imagine immersing yourself in the fantasy worlds created by some of the world’s most inspired minds on a daily basis.

That’s exactly what Koji Hoshino gets to do as his job. As chairman of the multi-million dollar Studio Ghibli, his duties include interacting with animation film legends Hayao Miyazaki and Isao Takahata, besides introducing weird and wonderful characters, such as Totoro the forest spirit, to the world.

“It is often quite amazing,” Hoshino says of his work. “It’s been a pleasant, tremendous surprise over all these years.”

In Hong Kong for the launch of The World of Studio Ghibli’s Animation 3D exhibition earlier this month, Hoshino admitted to being more of a businessman than an artist during a freewheeling chat on the sidelines of the show.

He joined Studio Ghibli from Walt Disney Japan in 2008 and has witnessed firsthand Ghibli’s growing influence beyond the home country. The big splash in the global market happened when Spirited Away won the Oscar for Best Animated Feature Film in 2001 and raked in $360 million at the international box office. Since then, the rapid rise of technology — such as that used in the exhibition to make 3D recreations of film scenes —  has expanded the scope of the studio sharing its products with the world, be it through films, touring shows or merchandise.

Hoshino believes the studio’s success stems from its core belief that stories can be interpreted in many different ways, and that having a diverse range of characters in each film ensures a connection is made with someone, or something, by everyone.

“Mostly I think our popularity comes from themes that all the Ghibli films depict,” he says. “It’s all about living. To live is oftentimes challenging and difficult. Miyazaki and Takahata prefer to not really explain things much, or set things up too much in advance. It’s more about delivering (the message) in such a way that the audience can judge (for themselves). The meaning is up to the individual (viewer).”

There’s a narrative fluidity that Hoshino says reflects the working habits of the studio’s creators, particularly Miyazaki, who seemingly likes to keep everyone guessing about what exactly is going on.

“His approach is that he doesn’t complete the story until right near the end,” says Hoshino. “He keeps on thinking about things. It’s difficult and time-consuming and cost-inefficient… but it works.”

Miyazaki’s films mean different things to different audiences as a result. “That’s maybe the reason why they have become accepted globally,” says Hoshino. “It’s a completely different approach than Disney animation or Pixar animation which seem to be much more clear-cut. Ghibli films are oftentimes ambiguous.”

The ambiguity Hoshino describes is most apparent in characters who seem to serve no purpose at all. In Howl’s Moving Castle (2004), for example, there is a separate universe of dust mites and a chubby dog who’s supposed to be a spy but does little more than sigh.

The character from Ghibli’s films that resonates with Hoshino the most and probably serves as a metaphor of the studio’s  continued success across three decades and more is that of Totoro.

“It is completely different to other symbolic Western characters like Mickey Mouse,” he says. “Mickey Mouse is a tremendous entertainer. He speaks, he dances, he does everything. Whereas with Totoro, what is he thinking? Is it a he or a she? Is he really visible or invisible? It’s such a mysterious character yet has that warm feeling that appeals to all ages. It reflects what we do best.”