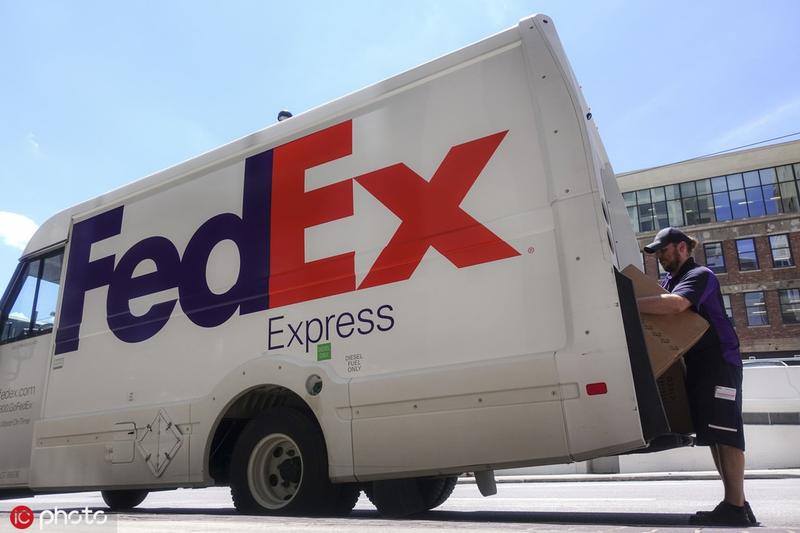 A FedEx delivery truck is loaded by an employee on the street in downtown Cincinnati, Ohio, the United States, June 25, 2019. (PHOTO / IC)

Police in Fuzhou, the capital of Southeastern China's Fujian province, said on Sunday they had seized a handgun found in a FedEx parcel and launched an investigation into the case.

The parcel, carried by the United States express delivery service provider, was shipped to a sporting goods company in Fujian from an American client, according to a statement released by the public security bureau of the city's Jin'an district on its Sina Weibo account.

The handgun was discovered in the package and seized by police, the statement said without releasing further details of the contents of the parcel

The handgun was discovered in the package and seized by police, the statement said without releasing further details of the contents of the parcel.

It is not the first time that FedEx, which launched its business in China more than three decades ago, has prompted official probes into alleged violations of Chinese postal regulations recently.

In early June, FedEx was placed under investigation after Huawei, one of China's largest telecommunications manufacturers, said it had diverted two parcels sent from Japan and addressed to Huawei in China to the US.

Initial results from the probe, released in late July, refuted Fed-Ex's claim that the rerouting was an "operational error". The company was also suspected of holding back over 100 packages that Huawei had intended to deliver to China.

As the investigation into the earlier incident continues, the recent discovery that FedEx shipped an illegal handgun into China shows that the US company has damaged the legal rights and interests of its clients and jeopardized public security in China, an opinion column published by China Media Group said.

"Its action is definitely not an occasional mishap, but an intentional violation of law," the column said. It urged FedEx to cooperate with the police and conduct serious introspection.

The column also mentioned an "unreliable entities list", a list of foreign companies, organizations and individuals that harm the legitimate rights and interests of Chinese companies and threaten national security, that is expected to be made public soon according to the Ministry of Commerce.

"China will take all sorts of necessary legal and administrative measures toward entities put on the list," the column said. "Foreign enterprises must obey laws and regulations if they want to grab development opportunities in the Chinese market."